skip to main | skip to sidebar

Onto track plans now. After years of deliberation, I have resolved to attack this project bit by bit, so that I might be able to exhibit any one of my envisaged modules as individual, self efficient sections. They would be able to link up via a series of small 'off stage' fiddle yard/scenic breaks, as the areas to be modelled are all a mile or so apart from each prior section. I got this idea from John Thorne's legendary 009 layout, the 'Ditton Railway Company'. This was also aided by many chats with my fellow Sussex Downs NG modelling group member, & friend Michael Campbell. He assured me this would be the best way to keep interest sustained & get something complete sooner rather than later. This was of huge appeal.
My main concern with this layout was not to get trapped by over enthusiastic attention to the prototype line. Rather, to just establish in model form, hopefully the very essence of this grimy industrial concern.
With this module, I wish to depict the former Sittingbourne end, quay side area, where the loco shed was situated. I propose some artistic licence by running the infamous viaduct behind it. Of course, in real life, the viaduct was up & away from here. Several hundred feet away at least, & its orientation was that it actually ran in a 90 degree angle to how I'm intending. I decided on this as I feel this layout is good for another two modules after this one, & none of those could incorperate the viaduct. I aim to represent Kemsley mill in some form & Ridham Dock. I have already perhaps cemented what to depict, but wish to reveal those ideas when I'm ready to undertake them.
Please excuse the poor diagram. Its a functional, yet ugly hotch potch of photoshop & of the  baseboard itself (in striking gloss blue, as its recycled ply). At least you'll be able to see what is intended. 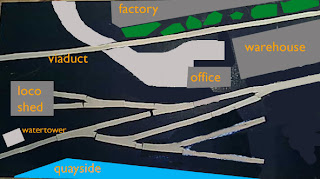 As you can see above, the line runs off the board on both sides, including the viaduct. My intention is to have a fiddle yard either side. That will also necessitate a raised section to both yards, due to the viaduct obviously being a scale 15 feet above the ground. I haven't yet resolved this. I dare-say this should be a simple enough concept to attempt. I wish to be able to shuffle trains back & forth across the viaduct, whilst shunting duties  occur down on the flat ground. My considerations were based on observations of what constitutes a 'crowd pleaser' layout when at exhibition. My findings were simply, that people want to see stuff moving all the time.
Next, I'd like to just mention, the handy dandy recently published book on this railway system. 'A Bowaters Album' by David Hammersley (Roxey Mouldings proprieter & long time fan & model builder of the railway itself).
I had the lucky fortune of finding out about this quite a while before it was released, so I decided to await its arrival before I committed to a final plan for my model. I'm glad I did as there were so many photos of areas I had never seen before. I'm happy patience prevailed. Its taken 5 years to get the courage up to take the steps to build this!
I managed to get my copy directly from David's hands at Expo Narrow Gauge at Swanley, Kent back in late october 09. As I had reason to be there before opening time, I was informed by David that mine was the first copy he had sold! Needless to say that I got him to sign the inside cover as such.
http://www.kevinrobertsonbooks.co.uk/product/view/1800 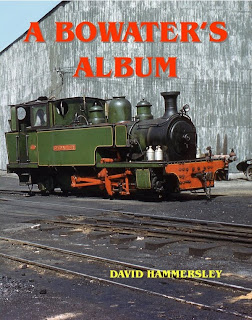 This is my rendition of the Bowaters 0-4-0 fireless loco 'Victor.
It is a still available Whitemetal Kit by Golden Arrow
http://www.goldenarrow.me.uk/services.htm
Its designed to go on either of two chassis, both now defunct. One being the Bachmann dockside shunter 0-4-0, the other the infamous Ibertren 'cuckoo' 0-4-0.
With both chassis, they are employed backwards, as on the prototype, the cylinders were reversed.
I have used the older, original docksider, which had plastic Walschaerts valve gear. This was as I wanted it to look more accurate.
Choosing this course added some more complications, as the motor is fairly large compared to the later docksider models. Luckily help was at hand with the Nigel Lawton remotoring kit for this chassis, which allowed me to employ this chassis without too many problems.
http://www.nigellawton009.com/BachmannCradle.html
The only trade-off was the position of the wheelbase was no longer central & balanced looking. However, this doesnt look too criminal in the flesh.
Here below are shots of the painting & lining pre weathering & varnishing. 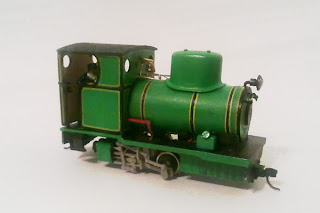 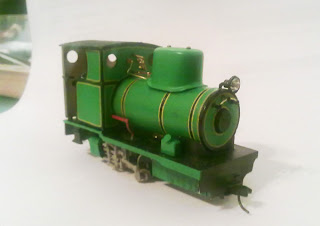 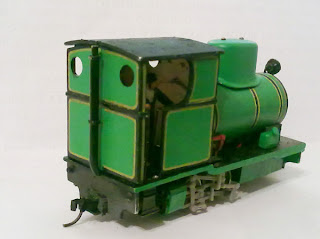 Now here are the completed paintwork shots. Later, when I get the time & inclination,I will include photographs of the Nigel Lawton remotor kit in application 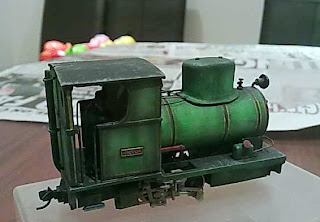 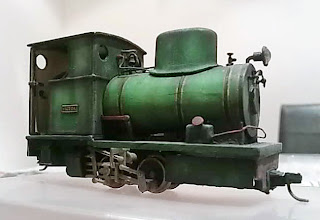 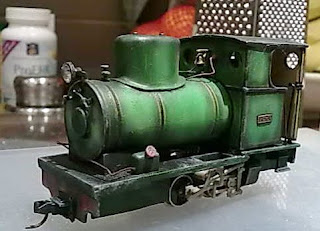 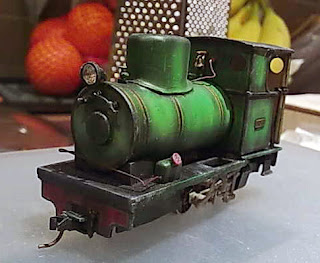 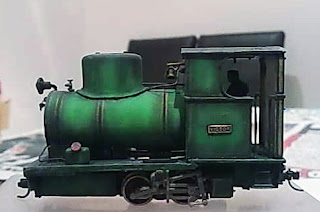 Posted by bowaters bert at 04:15 No comments:

Another reason I wanted to model this line is that I felt another welsh themed 009 slate layout was not how I wanted to begin modelling in this scale.
I may one day so, but I wanted to make an impression if I could.
I am aware of only 3 prior models of this line & none are from the past 15 years as far as I am aware. The other thing, handily is, that there is some strong kit manufacturer coverage of the stock. Chivers finelines make the bagnall 0-6-2 class. Golden Arrow make some stock & had made in the past a couple of others as  whitemetal kits & resin kits. They list as the Kerr Stuart Brazil class 0-4-2, The Kerr Stuart 'Superior' 0-6-2 & some of the wagons & even an etched brass carriage kit. The exquisite Backwoods miniatures even produce the large Manning Wardle built 0-6-2 'Chevallier'. Needless to say I've got these & they are either underway, about to be started, or even finished, as is the case with the not yet mentioned Golden arrow Kit of the smaller fireless loco from the line called Victor.
images to follow...
Posted by bowaters bert at 09:08 No comments:

righto,
this is my first post, so a quick intro.
I'm aiming to chart oh so slow progress with my project to build a modular 009 scale, narrow gauge model railway, of the former Bowaters paper mill railway in Sittingbourne, Kent, England. The line still partially exists under the preservational  efforts of the Sittingbourne & Kemsley Light Railway (SKLR). This line is famous for a couple of reasons. Firstly, it was the last working steam operated, narrow gauge railway in England.
My reasons for modelling it?
Well, I grew up in Kent, & it was the first narrow gauge steam railway I visited as a child in the early 80's. I eventually moved quite near to the line for a short period with my father in the late 80's. The line was beside the main route into the town center, & I always loved the atmosphere of walking beside the rickety old concrete viaduct to get to see my friends.
this brings me along to another reason for modelling the line; The viaduct.
It was a very early application of concrete & so is of some historical importance. It cries out to be modelled. I'm really going to enjoy getting to grips with that on my first module.
Posted by bowaters bert at 08:55 No comments:

bowaters bert
approaching 40 years old. Married with a son, who also has taken up model railways, though in 00 Thomas range (maybe gently guided by daddy as a distraction from my 009!). I have been building 009 models since 2005. Before that I was a musician & DJ involved in the UK electro Bass music scene (very specific dance music genre). Yep, Leaps and bounds away off topic, but I'd always promised to get back into model railways one day. I just didnt count on it being before 60!

Some Of My Favoured Links